For those interested in non-invasive flow metering solutions, it is important to understand the difference between Doppler flow meters and Transit Time Flow monitors.

While both products utilize transducer(s) that are mounted on the outside of a pipe, the window of applications and desired performance is strikingly different.

Doppler technology was the first to be used for non-invasive flow metering applications. Doppler Flow meters use a frequency difference technology. An ultrasonic signal in transmitted into the liquid, this signal contacts particles in the liquid and is reflected to a receiver. Based on Doppler Theory, the reflected signal come back to the receiver at a slightly different frequency. This difference in frequency is determined electronically and is related to the velocity of the liquid.

At the time of inception, hopes were high for the marketplace and there were those that believed that Doppler technology would lead to the flow meter to end all other flow meter technology. However, after a short period, Doppler Flow Meters proved not to be the end all in flow metering products. As with every technology, the window of good applications became apparent rather quickly.

The main limitation of Doppler technology is that the liquid being measured must contain some minimum amounts of suspended solids or entrained gas bubbles to operate properly. The operative words are minimum level and suspended solids. Depending on the manufacturer, specifications varied from 25 ppm of 25- micron to 100 ppm of 75-micron particles. These particles had to be suspended in the liquid and not dissolved. Dissolved particles do not provide the reflectors that are required for a Doppler flow meter to operate properly.

This being noted, applications such as potable water, deionized water, condensate, pure chemicals, and organic liquids, like highly refined fuels were not acceptable. Dirty water such as wastewater, sludges, and liquids that contained particle were well suited for Doppler technology. On the other side, liquids that contained levels of particle that exceeded 10% were found to inhibit the operation of this technology. The other question is the accuracy of the Doppler technology. These devices typically state accuracy around +/- 2.0% of full scale. The main attribute of Doppler technology, however, is linearity and repeatability. The devices have always hung their hat on these specifications. Because of this trait, Doppler flow monitors can be used in control situations where linearity and repeatability are desirable.

So, if the liquid meets the suspended solids requirement and accuracy is not overly important, a Doppler based flow monitor can be a low- cost choice for flow metering applications.

Transit Time Flow meters use a time difference technology. For starters, this method is highly accurate. Two transducers that are mounted up and down stream of each other based on programmed pipe data act as a transmitter and receiver. The upstream sensor, when acting as the transmitter sends a digital ultrasonic pulse to the receiving sensor downstream, with the flow. At the exact time the pulse is sent a timer is started and when the signal is received the time it takes the signal to travel with the liquid is calculated. Then the up and down stream sensor roles are reversed electronically. The downstream sensor sends an ultrasonic signal to the upstream sensor against the flow. The same timer sequence is initiated and the time against the flow is calculated. The times are subtracted from each other and the difference is related to the velocity of the liquid. This method, known as Delta-T, is a perfectly accurate science and leads to exactly accurate flow readings, among other benefits. Not only are flow readings accurate (+/- 1% of rate, or better) it brings along outstanding specifications for linearity and repeatability.

Transit time flow monitors, just like any flow metering technology has a window of applications. The window is rather wide and includes pure water, like deionized or demineralized, lake, river or well water, potable finished water, pure chemicals, or any liquid that is considered free of suspended solids. One major plus for the transit time technology is that conductivity of the liquid is of no concern, unlike magnetic based technologies.

Another plus it that the transit time flow monitor can tolerate suspend solids levels up to 5%. This opens the window of applications to wastewater applications that include, influent, effluent, RAS, WAS and other process sludges. The Transit Time flow monitors should not be used on heavy sludges or liquids that contain high levels of suspended solids.

Armed with this information, the end user of flow meters can make a better choice when considering ultrasonic technologies for monitoring flow in his or her operation. 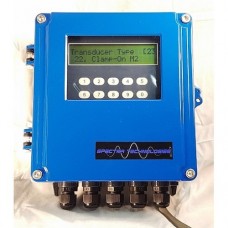 The Spectra Technologies model TTM-500 Ultrasonic Transit-Time Dedicated Flow Meter is the first product of its kind to provide accuracies that are equal to or better than wetted surface device counterparts. Learn more... 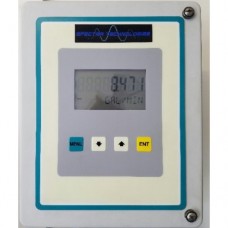 The Spectra Technologies model DF6100-EC is a fully programmable, non-invasive, wall mounted Doppler flow meter. Based on Doppler technology, the DF6100-EC does not come in contact with the liquid being measured. Learn more...